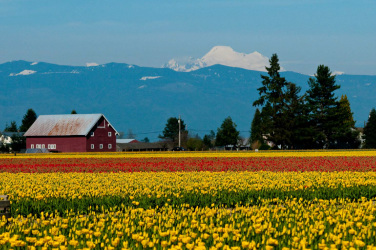 On Saturday April 20, the Croydons, the Thompsons, and Joe Phillips participated in the 32nd Annual Tulip Rallye, sponsored by the MG Club of Seattle. It was a very cool morning in Burlington, with 47 degrees, and a light breeze,
as we gathered in the Cascade Mall Parking
lot. There were 258 cars of all varieties and vintages registered.  Before the Rallye starts there is the usual waiting around for announcements and driver’s instructions, as well as checking out many of the unusual cars around. I have to admit that the three Corvairs attending got their share of attention. Dave and Nancy Thompson’s red ‘64 Monza convertible got its share of the attention. Joe Phillips was there with his red ‘65 Monza coupe. And of course Fred and Gale had their dark green ‘65 Corsa.  As we arrived, before I could even get out of the car, there were two guys at the back of the car checking it out. While Fred was gone for a few minutes, a guy asked Gale if he could see the motor. She opened the engine compartment and this just drew more folks to the area.  We traveled across the Skagit River into Mt. Vernon, east to Clear Lake, then north over the Skagit again into Sedro Woolley. Then there were some back roads and we were through Lyman and Hamilton. Then we were across
Highway 20 to the north side, eventually going into the mountains on Baker Lake Road.
At Tyee Lake, we were on a great slalom road winding back and forth up the mountain side, and back down into Concrete.