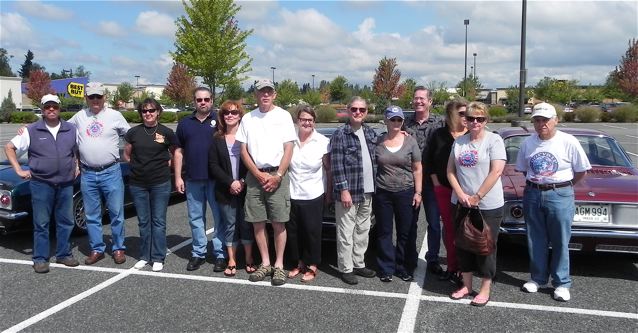 A meeting was held in the parking lot in back of Red Robin at Smokey Point.  In attendance were Lauren Burton, Debbie Grainger, Vic Kukrall and Larri, Jethro and Ceola Peoples, Fred and Tawney Heffley, Ron Zentner, Gordie and Barbara Croydon, Dave and Nancy Thompson, Bill Chellis and Fred Croydon.

A major part of the discussion centered around the activities of the club, and what to do about meetings, as that seemed to be of concern.

Primarily, most saw the social aspect of a meeting as being important, but also that any discussion of a proposed event, or function, builds as everyone contributes to the idea.   The end result is more folks gain an interest in attendance.  That seems to be lacking right now.

The discussion ranged from locations; To times; To potluck meetings; To meetings at members homes; To agendas; To why folks are not responding; and to participation in planning the activities.

The consensus was to have a meeting each month;  To meet on a Saturday or Sunday;  The meeting may coincide with a function or event;  The meeting can either be midmorning or evening, depending on events;  Each meeting should have a coordinator in charge of the entertainment (speaker or technical talk) agenda;  Planning for each meeting should be two months in advance; Alternating North (Mt. Vernon/Burlington) and South (Everett/Bothell) Meetings should be considered.

The August meeting will be held in conjunction with the Crab Picnic at Graham and Nancy Dell’s residence.  The primary agenda for that meeting is to determine the agenda for the September meeting, as well as the date and place for the October meeting, which is the annual meeting for nomination of officers for 2014.

The load of running the club should not be left to the President, but shared by the Executive Board.  Ron Zentner, as VP, will step forward when Mike Klaus is not available.

Fred Croydon, as secretary, should publish minutes of this meeting, coordinate the content for approval from Ron Zentner, then forward to all members.