Like many organizations, the fortunes of the club have ebbed and flowed over the years. In early 2007, in an attempt to broaden the appeal of a club that had nearly died, a proposal to change the name to the North Cascades Corvairs car club (NCC) was made. All the Charter Members who could still be found supported the name change. At the February 2007 membership meeting, the proposal to change the club’s name to North Cascades Corvairs was unanimously passed by the members present.

Since that time, several other changes took place. The club developed an attractive new logo. A terrific website was developed. A line of club merchandise was successfully created. We reached out to a younger generation of Corvair owners. When two young people back East could not find a local club, the people of NCC made them honorary members of North Cascades Corvairs. In addition, NCC made a $100.00 donation to the Twin City Idlers Scholarship fund. This fund provides a scholarship to a Stanwood High School senior going on to an automotive related field. In the fall of 2007, a tour of Skagit County wineries proved to be a popular new event. Charities were not forgotten either. In December, the club donated 50% of its treasury to Washington State flood victims. And our Valentine’s Day event, the Sweetheart Cruise continues to grow in popularity. It gives club members an event to be shared with friends and lovers. Not to mention getting an early start on driving our Corvairs.

As the club enters 2009, it continues a period of growth. Membership retention exceeds 90% and NCC continues to attract new members. The Hinton Chevrolet Show in Lynden will return to its all Corvair roots this spring. Additional cruises are planned. A caravan to the NW Econo-Run in Spokane and the Great Western Fan Belt Toss and Swap Meet in Palm Springs, CA are in the planning stages. All the other events mentioned above remain on the schedule for this year.

It is a very good time to be a Corvair owner in North Puget Sound. 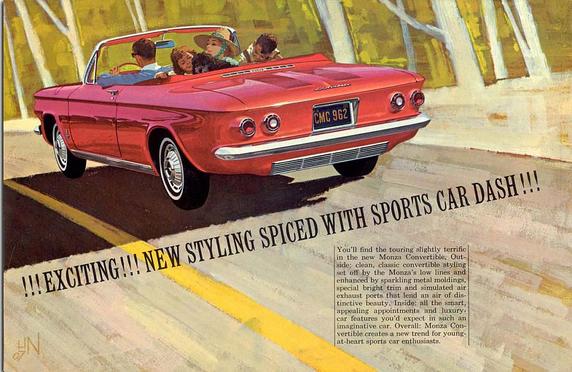